“I’m going to own that place one day.” -Lloyd Anderson

The Ekstedt family were the original owners of what is now Sunset Beach. At this time however, it was called the Ekstedt’s Place. It was primarily a bathing beach. The refreshments store was originally a full restaurant. The Ekstedts eventually sold the beach to the Athertons. Two years later, the beach was bought by Lloyd Anderson. 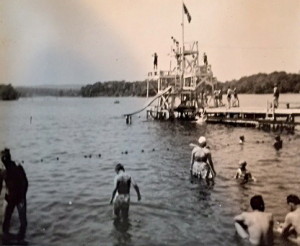 Lloyd Anderson started off working here as an employee to the Ekstedts. He worked hard and finally acquired the beach in the late 1940s. He was a real visionary. He changed the name to Sunset Beach and even made a sign on the waterfront so that people on the lake would know about this place also. Lloyd built a set of 5 towers, a waterslide, and a diving board at the end of the long wharf. 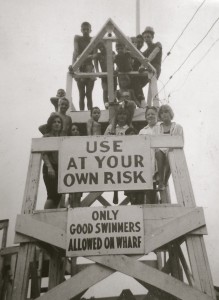 He also built the boat docks that wrap around the cove. In the swimming area, they had tubes and rubber doughnuts from WWII to climb and play on. A parachute from the War & Navy store was also hung on the ceiling of the Refreshments Store, which resided there until 2008.

He started off renting only rowboats and canoes. Then he added some paddle-boats which were a hit, followed by kayaks which were an even bigger success.

Unfortunately, Lloyd fell ill with a lymphoma and passed away on December 7, 1950. Sunset Beach was then inherited to his parents Olga and Andrew Anderson.

Olga and Andrew Anderson moved into the Old Faith Rd house and gained ownership of the beach in 1950. Although Olga and Andrew owned Sunset Beach, their daughter Merilyn and her husband Philip “Buddy” Mulcahy ran and managed the business.

In 1963, Merilyn and Buddy bought Sunset Beach. Unfortunately, around 1967, a winter storm knocked down the towers. After this incident, only the two current towers were able to be restored.

The local swim teams would practice at Sunset Beach and have their meets here. All of Merilyn’s daughters participated in the Sunset Beach Swim Team. These swim team activities lasted until the mid 1980s.

The local Shrewsbury Parks and Rec also held swim lessons at Sunset Beach until the early 2010s. At this time, the beach was worked by their children and grandchildren. When Buddy passed away in 2010 (preceded by Merilyn in 2002), the beach was inherited to their daughter. 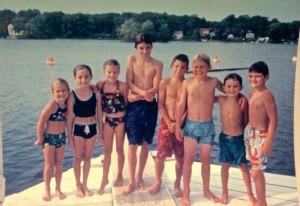 Sunset Beach is still run by Buddy and Merilyn’s children and grandchildren to this day.

As well as the day to day walk-in customers, Sunset Beach is a favorite destination for many local camps and clubs. Summer camps such as the Boys and Girls’ Club, various YMCAs, local Parks and Rec organizations and many more take field trips to Sunset Beach.

Everywhere you look, you can see glimpses of the past. From the long wharf and towers that have felt so many footsteps, to the store that has seen the many changes and evolution of candy and ice cream. There is history all around you at Sunset Beach. When you visit us, be prepared to step back to a simpler time, where friends, family, and fun are the most important.